How to display volume rendering of large volume Images

Hello, I have been learning VTK for one year. This is my first question. I met some questions about the visualization of large capacity images, about 50GB，100GB，500GB，1TB. These are some TIFF microscopic images, so the images is very large. Now i tried to display these images in volume rendering. but it seems that the performance of the GPU card is insufficient, causing the driver to report an error, as shown in the following figure.
system: win 10 x64
CPU：Intel Xeon E5-2680 v4 @ 2.40GHz (X2)
Memory: 256GB
GPU: NVIDIA RTX A4000 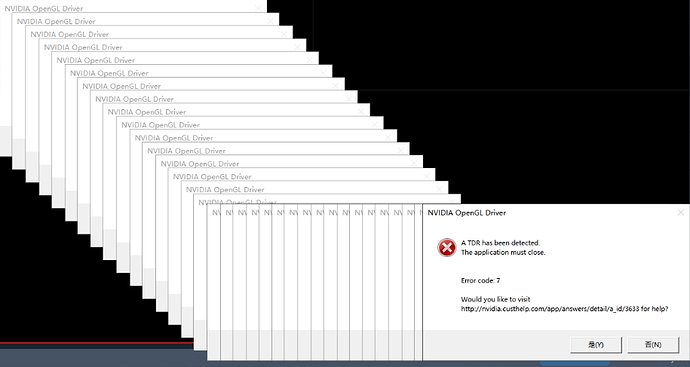 So how can I solve this problem? Thanks a lot.

Most likely the image is given entirely to the GPU , causing it to crash because it cannot fit the too big image. What are the mappers / actors / render view classes that you are using ? Some mappers allows for image streaming and this feature may solve your issue.

Thank you for your reply. I use these classes, such as vtkSmartVolumeMapper，vtkVolume，vtkVolumeProperty，vtkRenderer。And i found suggestions on NVIDIA’s official website, https://nvidia.custhelp.com/app/answers/detail/a_id/3633。I know that this is really caused by the insufficient performance of the GPU, but I still want to know whether there are other ways to optimize and improve this situation, such as using VTK in other ways.

There are a few things that come to my mind for improving peformance without changing the size of the image :

Thank you again for your reply, I tried these methods according to your suggestions, which helped a little, but it was not big. There was no error when the mouse interacted, but the jamming was very serious. So I want to ask：

VTK per se is not the kind of software you’re looking for because your problem basically boils down to : image is very big but you want to visualize the whole image anyway. What you may want to try instead :

ParaView can also work if you have multiple GPUs on a single computer, just spawn as many pvserver as GPU available and assign a single GPU per server.
You may want to read https://docs.paraview.org/en/latest/ReferenceManual/parallelDataVisualization.html