It’s about time for another VTK release. The CI dashboards have been stabilizing fairly well with just one flaky test (being excluded here) and it seems like a good time to start cutting a release.

First up, the next release is planned for about 6 months from now (late September/early October) with a similar schedule (see below). So if you miss this release, the next one shouldn’t be too far away. With CI and the robot able to help out more and the release process being more structured, there isn’t as much manual work involved anymore.

Second, as with 9.1, there seem to be a lack of release notes, but not as many at least. It’d be nice to get these in before we collate them (those added after the branching will need backported to add to both master and release). I would recommend perusing the Documentation/release/dev directory to make sure that any contributions are mentioned that should be in the release notes. Release note MRs should be prioritized.

Third, it is up to code authors to ping reviewers for MRs. We cannot commit to reviewing everything just because it was submitted, sorry. Please tag MRs with the 9.2 milestone to at least get some metadata wrangling involved.

Fourth, in order to keep the release under control, as we get closer to the final release, features are likely to be reverted rather than waiting for a fix (waiting for fixes that never happened is why 8.2.1 never got released). If a problem is there on Monday and you can get to it on Thursday, it is likely to be reverted until it can be fixed. In order to bring the change back, running git revert -m1 $merge_commit will undo a merge and can be added to the MR that fixes it up. Alternatively, the branch can just be redone as if from scratch; up to you. 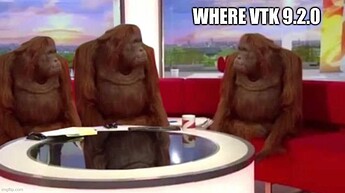 May 6: final release (if all else fails)

Hello, I was wondering if the VTK release 9.2.0 was still soon to be expected. It seems like we are slightly past the tentative release dat (May 6th). Should we expect a release any time soon ?

Hello, I was wondering if the VTK release 9.2.0 was still soon to be expected. It seems like we are slightly past the tentative release dat (May 6th). Should we expect a release any time soon ?

It seems from the GitLab repo that even rc1 hasn’t been frozen yet, so my guess is that 9.2.0 final release isn’t likely to be released anytime soon.

Yes, the CI was a mess when I went to branch in early April, but I didn’t have time to deal with it and have been working on other tasks since then. Dashboards seem to be shaping up a lot better now; maybe I’ll get time soon.

Hello, I see that binaries for VTK 9.2.0 are now available on the VTK website, but I was wondering if Python wheels would be made available on pip and/or conda anytime soon.

With conda search -f vtk the latest version available on conda seems to be 9.0.3

In addition, pip index versions vtk gives me 9.1.0 as the latest version.

It would be great if 9.2.0 would be available either through pip or conda. I need specifically version 9.2.0 to fix a compatibility issue with matplotlib.

The wheels has a hiccup where the macOS x86_64 wheel was marked as universal2. This is…not correct and has now been fixed, but since the 9.2.0 tag is “used”, there will be a 9.2.1 instead. Same code, just different build instructions.

Thanks a lot Ben, when will this be available?

When this pipeline makes all of the artifacts and I then upload them.

So it’ll be next week at the earliest. Some changes in Python setuptools made some changes required to our Linux code to figure out where bdist_wheel will put things. This ended up working fine except on Windows Python 3.9.9 which doesn’t include setuptools in its distribution for whatever reason. Updating to 3.9.13 looks like it should work, but I won’t know until the pipeline gets back (and I do something about it next week).