I have been noticing some inaccurate principal curvature estimates near peaks of some of manifolds I was working with. Example included below. Areas with issue are pointed by arrows. These inaccuracies are affecting calculation of other curvature-based metrics like curvedness and shape-index. 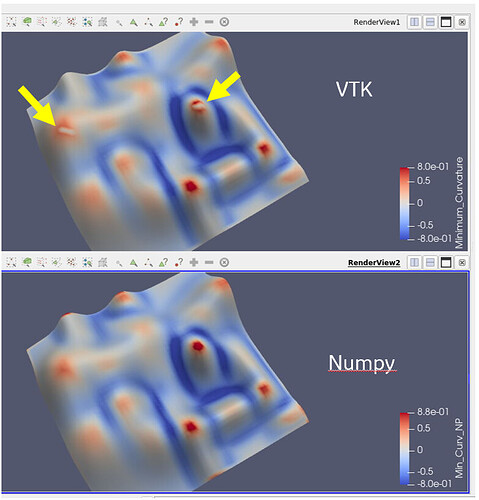 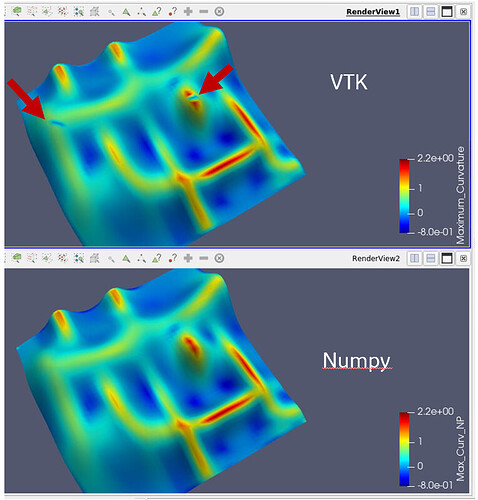 I tried and got “Sorry, new users can not upload attachments.”

As new discourse user, I am not allowed to upload attachments.

This workaround might work: I used random hill class. Here is the code snipped with fixed random seed that should generate the same surface, albeit not sure:

FYI @cbhushan you should be now able to upload files. You profile just got upgraded.

Thanks. The original file is attached.

My guts tell me that at these point locations, the gaussian curvature almost equals the squared mean curvature, which means that kmin ~ kmax ~ mean curvature. But in reality there should be a complex number looking like kmin = mean curvature + i * something_very_small.

It is actually worse. At those points the gaussian curvature is very big and likely holds a large error because of the discretization. What happens when you have H^2 - K < 0 is that the estimated surface is not anymore a nice manifold with points with real coordinates.

This f(r, theta) is real because we said so (so b and c are the conjugate of each other in this instance).
You can show by making those coefficients correspond with what you would have in cartesian coordinates, that
K = 4(a^2 - 4 bc) and H = 2a.

When you write H^2 - K, you end up with 16bc. If b and c are conjugate, as we said they were, this is a positive real number. If not, it means that your heightfield is complex, and you’re in trouble.

So basically you cannot really trust the computations of H and K in your example.

I am setting those points to zero. Code snippet below. I do not think those points belong to the case of H^2 - K < 0

In the data set you shared, those points are not set to zero, they are equal to the mean curvature. You can see it by looking with a spreadsheet view in ParaView.

My bad, I was pinging the wrong point. In those instances, you have H^2 - K almost equalling zero. So I suppose numpy did the computation differently. We could fix that in VTK by adding a larger error window than there is currently.

I do think your initial guess is in the right direction, i.e. kmin ~ kmax ~ mean curvature seems to hit some precision or error-window issues.

Can you point me to the corresponding C++ code where principal curvatures are computed?

It is in Filters/General/vtkCurvatures.cxx, in GetMinimumCurvature and GetMaximumCurvature. It works for an error of 0.1, which is kind of large…

Where SIGMA equals 0.001 for example.
This will allow a smooth transition from undefined to small.

However, in certain scenario it may be desirable to allow custom error-window (at class level) that should be treated as zero (please ignore any syntax errors

This topic attracted my attention, because I’m all in for fixing numerical instabilities in VTK.

I noticed this code in ComputeGaussCurvature():

The math in vtkMath::AngleBetweenVectors() will give a more precise answer than acos(), and it might be faster, too, because it doesn’t require normalized vectors.

Here is another example which shows clear issues when kmin, kmax are identical or very very close. This is a sphere with radius 1. 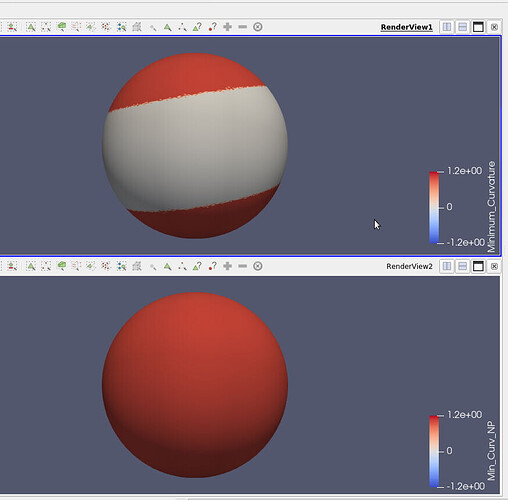 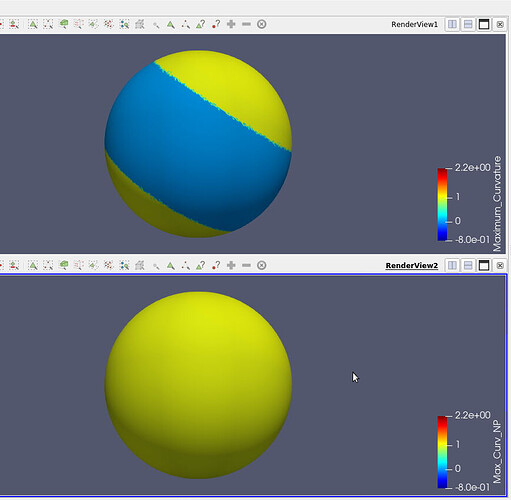 Just to be clear: numpy is not doing anything magical. Numpy calculations in my script is treating the H^2 - K ~ 0 case differently than how VTK c++ code is treating. VTK is setting kmax/kmin to zero, my script is setting them to H (mean curvature). 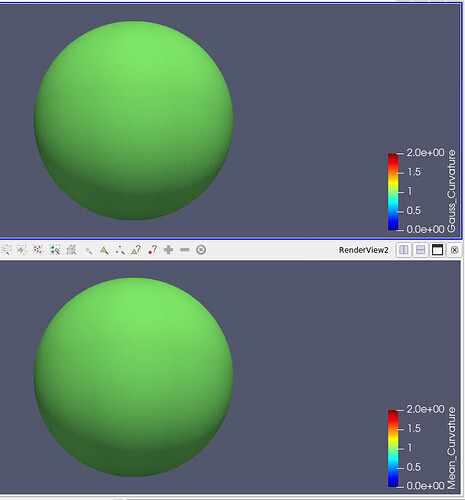