Is it possible to have a render window with multiple viewports and have only one vtkRenderer instance that each of the viewports views from a different perspective?

Currently, the only way I have been able to do this is to create many separate vtkRenderers and simultaneously update them all. In PyVista, we have a way to set up many renderers under viewports of arbitrary geometry in a render window (many thanks to @marcomusy), but I’m looking for a way to view a single scene/vtkRenderer from different perspectives to get something that looks like this: 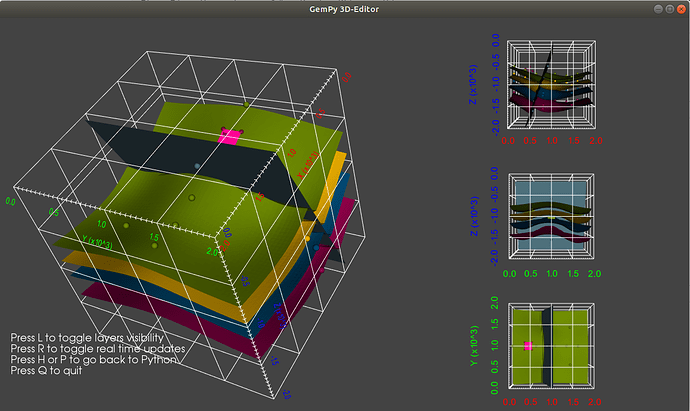 Bane,
You’ll need a different vtkRenderer for each viewport.

Yes, we can have multiple viewports with only one instance of vtkRenderer. You can follow this example:
https://vtk.org/Wiki/VTK/Examples/Cxx/Visualization/MultipleViewports

Let me know if you have any questions with it.

Yes, we can have multiple viewports with only one instance of vtkRenderer. You can follow this example:

Separate vtkRenderers are the only way to do this. Is there a technical reason you can’t/don’t want to use more than one?

Is there a technical reason you can’t/don’t want to use more than one?

It creates a lot of overhead (mainly on the code side of things) if the scene gets complicated/has many actors in it - if I want to add/remove actors from the scene, I have to make sure that is repeated for all sub plotting renderers.

I suppose I could add hooks so that anytime the “primary” renderer is altered, those changes propagate to the other renderers as well. So my main technical complaint is really that the code to manage that will get messy.

if I want to add/remove actors from the scene, I have to make sure that is repeated for all sub plotting renderers.

Since you literally want to look at the same scene from different angles, you maybe able to play some tricks. For example, you can render the scene in backbuffer (or offscreen buffers) from each of the sides and then just past those buffers on the side renderers. Thus, the side renderers are simply images and don’t really have the full scene and are not interactive. You just need to make sure you update them whenever the active scene changes.

@utkarshayachit, what you describe is exactly what I want! No need to interact with those 3 plots to the right so static images would work well.

For example, you can render the scene in backbuffer (or offscreen buffers) from each of the sides and then just past those buffers on the side renderers.

I’m not sure I’m familiar with this task, how exactly would that be implemented? Would I have a hook that takes those three screenshots anytime the renderer is modified or at a specified time interval? How would I do this without making the camera go wild in the “primary” scene?

it’s definitely non-trivial code, but something like the following is a start.

Next stage would be to see how the back and forth from GPU to CPU to GPU can be avoided for the side renderers, but this should get things going.

Ah that’s very clear, thanks @utkarshayachit! I think I can handle all of that in PyVista, however capturing the 3 screenshots of the primary renderer off screen still seems a bit confusing.

Would I basically perform the following workflow:

For the most part, you’re correct; .SetOffScreenRendering(True) may be unnecessary though; I think vtkWindowToImageFilter has API to tell is render to back buffer, which should avoid showing the results onscreen and thus will be faster than using offscreen buffers. In otherwords, there are options there, so just bear that in mind.

Would it not be simpler to add a root vtkAssembly to each vtkRenderer and then just manage adding/remove actors (AddPart/RemovePart) from that one assembly? That would eliminate the synchronization issue. You can handle nested actors this way too.
https://vtk.org/doc/nightly/html/classvtkAssembly.html

Hm, that’s an interesting idea as well - I’ve never used vtkAssemblys. Thanks for sharing that as well, @toddy!