I create a vtkMultiBlockDataSet consisting of a number of vtkUniformGrid’s.

This is the result of an AMR code and I have grids at several levels. I compute the blanking explicitly and use the vtkDataSetAttribute::REFINEDCELL bit to mark the cells that are refined at finer levels.

This is all assembled in Python with VTK 9.0.1.

However, when the resulting dataset is opened in Paraview, it seems like the cells where REFINEDCELL is set (an no other bits) - i.e. cells where vtkGhostType == REFINEDCELL is not “hidden from view” as it should. They are still rendered and visible.

HIDDENCELL’s and DUPLICATECELL’s are rendered correctly (not rendered at all). See this screenshot: 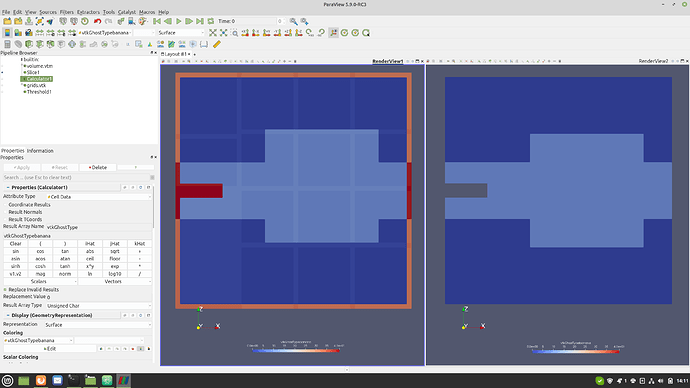 Additionally, it seems like this works if I create an vtkStructuredGrid instead of an vtkUniformGrid… Is this intended or a bug?

When it comes to visualizing ghost cells, only DUPLICATECELL and HIDDENCELL ghosts are not rendered. Everything comes from the method vtkPolyData::RemoveGhostCells, which effectively removes those 2 types of ghosts.

If you need to differentiate refined cells from hidden cells, you can set a cell to be both hidden and refined by setting its ghost value to HIDDENCELL | REFINEDCELL. This way, you can keep track of the refinement in your code, and the cell will not be displayed in ParaView.