I compiled and ran the TriangleColoredPoints example (https://vtk.org/Wiki/VTK/Examples/Cxx/PolyData/TriangleColoredPoints) but no render window was displaying and I was getting the following warning: WARN| vtkInteractorStyleSwitchBase (0x5626f82e6430): Warning: Link to vtkInteractionStyle for default style selection.

The render window now displays but the output is messed up as you can see in the following image. 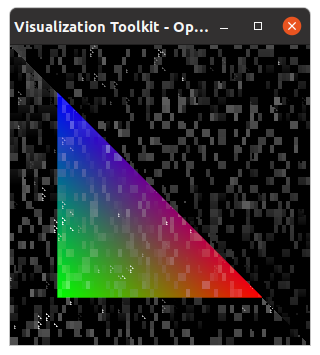 If the camera is rotated a bit, the following output is displayed: 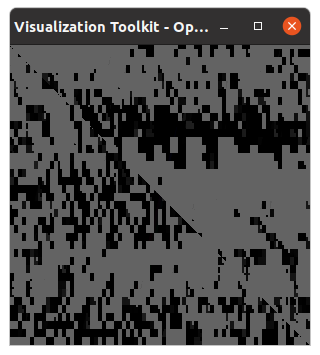 What could be the cause of this? I have the same issue with different polydata as well. I am using VTK 9.0.0 on Ubuntu 20.04.2 LTS. I also tested this with the latest commit from master.

EDIT:
I also tested the newer ColoredPoints example (https://lorensen.github.io/VTKExamples/site/Cxx/PolyData/ColoredPoints/) and added the following in my CMakeLists.txt file instead of using the VTK_MODULE_INIT macros.
vtk_module_autoinit(
TARGETS example
MODULES ${VTK_LIBRARIES}
)

I got the following output: 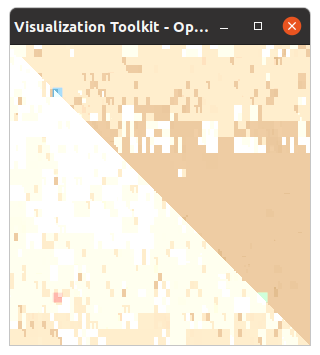 I use the NVIDIA drivers and have no issues.

The new VTK Examples site is vtk-examples and the examples corresponding to those no longer maintained ones are: TriangleColoredPoints and ColoredPoints. These render perfectly well using VTK 9.0 and the NVIDIA drivers in both Windows and Linux. Also the CMakeLists.txt files should need no modifications.

Thanks for your reply.

I can confirm it works with the latest Nvidia driver. I also tried reinstalling the Nouveau driver and the issue persisted. Is the default Nouveau driver not supported?

When I modified the CMakeLists file I included the below snippet, which is present in the new examples, but not the old ones:
vtk_module_autoinit(
TARGETS TriangleColoredPoints
MODULES ${VTK_LIBRARIES}
)

I might be wrong but I suspect that not all the features of the NVidia cards are emulated by Nouveau. You will get far better performance using the NVidia drivers e.g. NVIDIA/Nouveau vs. NVIDIA Linux Driver

Most likely this is true. The strange thing is that ParaView 5.8.0 works just fine with the Nouveau driver, so it is a little odd VTK had an issue. Doesn’t ParaView use the VTK rendering features? Maybe a different (older?) VTK version is currently used by it.

Someone else maybe be able to answer this. However I am sure that you will find ParaView will be much faster using the NVidia drivers.

I just compiled VTK 8.2.0 and it works with the Nouveau driver. It seems VTK 9.0.0 has an issue with Nouveau (at least for me).

Anyway, I will use the Nvidia driver. Thanks for the help Andrew!