Since my previous question went unanswered (vtkTubeFilter - representation and intersections) I looked around a little bit and it seems to me that vtkHyperStreamLine could be used to create a “tube” representation having an elliptical cross-section.
Basically I have a curve in 3D defined by a certain number of points, and at each point I know the length of the two axes of the ellipse. I’ve looked at the vtkHyperStreamLine and there’s a lot of talk about eigenvectors, but does anyone know of a more straightforward way to construct a streamline given the information I have?
Maybe my math is very poor, any suggestions would be more than welcome.

Thank you in advance for your help.

Hey Andrea,
maybe it’s not a question about your maths but about your understanding of Hyperstreamlines.

The way hyperstreamlines are computed is then the following:

If we now try to translate that concept to the data that you have, we end up with essentially two options:

I hope that helped a little.

Perhaps you could try to obtain tubes with an elliptical cross section with vtkLinearExtrutionFilter: https://vtk.org/doc/nightly/html/classvtkLinearExtrusionFilter.html .

Thank you for your suggestions. I’ll see what I can do with both of them. Paulo’s suggestion appears to be easier to implement, although I first have to understand how to create one ellipse at each point of the 3D curve, having this ellipse somehow “perpendicular” to the segment I’m analyzing. I know that “perpendicular “ makes no sense in this context but I can’t come up with the proper term here…
It should kind of look like vtkTubeFilter but with an ellipse as cross-section.

Thank you again for your kind suggestions.

Please, take a look at the example: https://vtk.org/Wiki/VTK/Examples/Cxx/PolyData/LinearExtrusion . Extrusion works by… er… extruding…

a shape along a path. It’s supposed to be simple. A “seed” ellipse can be generated either programmactially with sines and cosines in a loop or by chaining vtkRegularPolygonSource (to generate a circle) and vtkTransformFilter (to flatten it): http://vtk.1045678.n5.nabble.com/How-to-draw-an-ellipse-td1239501.html .

I have tried to follow your recommendation, and it kind of works but not as well as I thought. I will put a little script that can be used to look at my problem, but this is the description of the issue I am having:

Thank you in advance for your suggestions.

For SetExtrusionTypeToNormalExtrusion() to work properly, you need to set normal vectors for each vertex. The normal vector tells VTK how to orient the extrusion result (among other things such as shading). You can set normals like this:

if point uncertainties in your measurements refer to the cartesian coordinates (or one axis is small wrt the other two), then you might consider using vtkRibbonFilter or vtkRuledSurfaceFilter instead of an extruded ellipse, e.g. in vedo (works in python2 and 3): 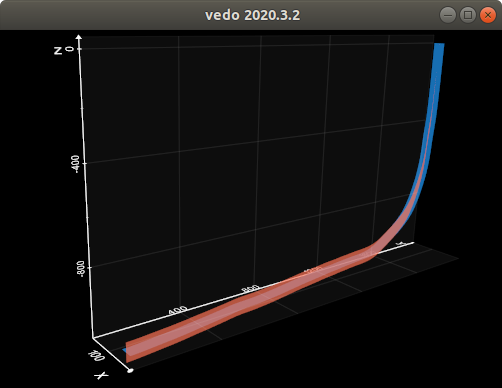 I have modified the make_ellipse method to incorporate your suggestions but now nothing gets rendered on screen. I only get a black render window with no 3D curve nor elliptic tube.

I have modified the make_ellipse method to incorporate your suggestions but now nothing gets rendered on screen.

I have reduced the sample to just look at the last two points of the curve, and made the ellipse bigger so it is plain to see that it is not extruded down the line. It’s plain obvious by running the attached script and rotating a bit the view around. It seems that the ellipse stays in the x-y plane and it is extruded along some unknown direction.

Since the documentation on the extrusion types is zero, my understanding is that this piece of code:

I am probably misunderstanding some facts here, and pretty much all the examples I have found use a vector or (0, 0, 1) or (0, 0, 100) (such as https://lorensen.github.io/VTKExamples/site/Python/GeometricObjects/EllipticalCylinder/).

Could someone please clear up my misunderstandings and misinterpretations of how vtkLinearExtrusionFilter is supposed to be used in this case?

Thank you in advance.

your approach has of course a lot of potential, and I like very much what you have done with vtkplotter first and vedo now. Especially your reworking and re-interpretation of the broken vtkAxis and vtkCubeAxesActor is phenomenal.

I might end up following your suggestion if the other route becomes impassable, although for the moment I’ve taken it as a personal snub and insult from VTK and I’d like to understand at least why the ellipse approach does not work. And also because elliptic tubes would look much more appropriate for my application.

Thank you!
Maybe you are forgetting to rotate the ellipse: 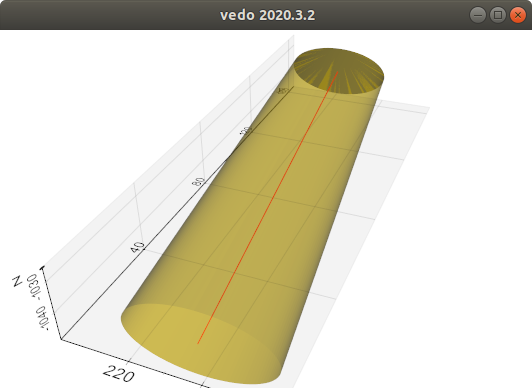 To solve the problem of the tube disappearing try actor.GetProperty().LightingOff()

Ah well, if I have to rotate the ellipse in 3D then I’m back to what I was saying in one of my first replies:

Paulo’s suggestion appears to be easier to implement, although I first have to understand how to create one ellipse at each point of the 3D curve, having this ellipse somehow “perpendicular” to the segment I’m analyzing.

Then of course it’s obvious, I got sidetracked by Paulo’s comment:

a shape along a path. It’s supposed to be simple.”

Maybe I’ve misunderstood the original intent and now that I think about it it’s obvious that you have to tell VTK how to rotate the ellipse. So I’m back to my original idea and I’ll just have to figure out how to put the ellipse in space before extruding it.

It seems that simple extrusion won’t help you properly. Take a look at this example: https://lorensen.github.io/VTKExamples/site/Python/VisualizationAlgorithms/HyperStreamline/ . It is based on your first idea to use hyperstreamlines.

Turns out it can be done, with a bit of pain, by rotating the ellipse to the appropriate direction. So, the procedure is: 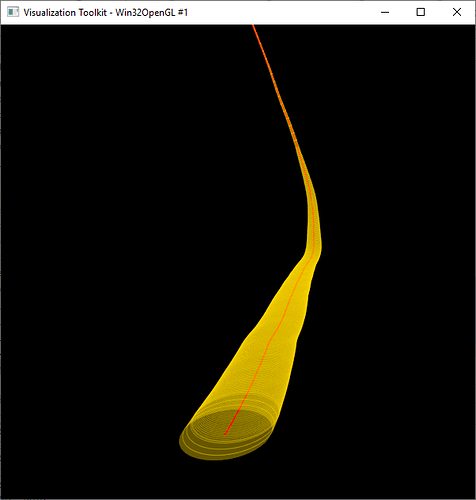 I made the tube half transparent so I could see the inside too. Now the only thing I need is a way to smooth out the resulting polydata so that it becomes a nice, smooth surface without all those visible lines. I am not sure if it is possible bu I welcome any suggestion on this matter as well

Thanks to Paulo an Marco for your suggestions, and to anyone who would like to chip in and help me close this issue.

You may use vtkAppendPolyData and then vtkCleanPolyData of the output.

I’m already doing that. If you look at the attachment I sent yesterday you’ll see that I am appending each extrusion to a vtkAppendPolyData and then using vtkCleanPolyData on the result. It doesn’t seem to do much overall…

It’s a tolerance issue, this works for me:

Thank you Marco, it’s almost perfect now. I’ll have to live with some very minor visual artifacts happening when the curve has sharper turns - as the ellipse changed its inclination more abruptly - but nothing major, I’m happy

Thank you for your help.