Hi!
In my application I am trying to add some quadratic cell (vtkQuadraticQuad and vtkQuadraticTriangle) in a vtkUnstructuredGrid. The problem is that, as in the following example (https://lorensen.github.io/VTKExamples/site/Python/GeometricObjects/IsoparametricCellsDemo/) there are some internal edges that are displayed. Therefore, it is hard to see if displayed elements are quadratic ones or simply several triangles…
In paraview I managed to create a quadratic quad and internal edges seems not to be displayed I assume then that it may be possible to do the same under vtk.
Does anybody have an idea of how to do that?
Thanks in advance !

Hi all!
Sorry to repost but my problem is always there and I found no solution… Nobody have any idea on how to remove internal edges of quadratic elements?
Maybe it can be possible by removing edges of cells actor (EdgeVisibilityOff) and adding edges separatly in another actor with a vtkExtractEdges filter. But this seems to much complicated for such a simple thing…

You can hide edges by setting a vtkUnsignedCharArray named vtkEdgeFlags as point data. This array is read at rendering and edges flagged as ‘0’ are not drawn. Points are mapped to edges counter clockwise if I remember correctly, but you will figure this out pretty fast by playing with it.

If you want an example of its use, look at class vtkHyperTreeGridGeometry (in VTK master), and don’t hesitate to ask questions if you run into issues going forward.

Thank you for your answer !
Sound promising after activating GetPointData().SetActiveAttribute(vtkEdgeFlagsArray.GetName(), vtk.vtkDataSetAttributes.EDGEFLAG) but I’m afraid this doesn’t works.
For example, if I take a quadratic triangle with end points 1, 3 and 5 and middle points 2, 4 and 6.
If I turn edgeflag to 0 for points 2, 4 and 6 it hides internal edges but also edges between points 2 and 3, 4 and 5 and 6 and 1. In fact in a quadratic triangle there is 9 edges including internals and only 6 points at all. So how can we choose to hide only the 3 internal edges?

I’m assuming that you are dealing with triangles right? If so, you would need to duplicate the points and attach to the points of the cells inside the hull zero vtkEdgeFlags. This is how it is handled in vtkHyperTreeGeometry.

In my case i’m using vtkQuadraticTriangle, vtkQuadraticQuad, vtkQuadraticWedge, vtkQuadraticTetra and vtkQuadraticHexahedron and in those cells I don’t think we can duplicate points.
In the vtkEdgeFlags example they draw a square using 4 different triangles. In my case it means that I should create several triangle cells to represent one quadratic element and this is a main change in my code.

By looking around, someone pointed me to this old test file that seems to generate what you intend to do: VisualizeLagrangeTriangleMesh.cc (9.4 KB)

It might be vtkDataSetSurfaceFilter which does the trick, but I didn’t test enough to figure out exactly where the magic happens.

Here is a screen of the result rendered in ParaView: 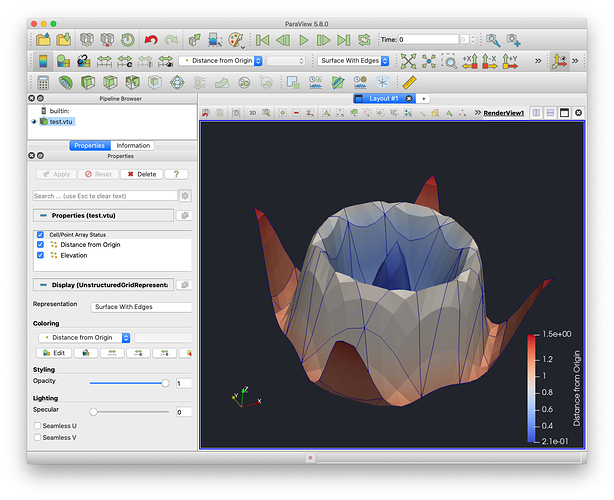 I hope you figure out how to apply this example to your setup soon!

For hiding the internal edge of quadratic cells in VTK you could use vtkUnstructuredGridGeometryFilter and vtkExtractEdges
C# sample code:

@kamyar The approach you show here is the one I use because I couldn’t find a better way.
However, it does mean that you cannot take advantages of the actor methods to hde/show Edges etc. and instead you have to manage visiblity of the actors in your own code. Which isnl’t horrible, but is a pain.
It seems that Paraview has a much more convenient way to handle this - maybe I need to look at the Paraview code… Paraview does seem to use edge flags, but they can’t be using the standard VTK edge flags because they are pretty much unusable for this task as shown by @Flagada above.
It seems that either very few people are using higher order cells otherwise there woudl be an easier way of doing this by now.
Or maybe there is an easy way, and I just don’t know what it is…

I having also the same problem. Is there way to represent an actor as in ParaView (Surface with Edges)

The solution given par @kamyar works well. As you said @scotsman60 it’s not horrible but it requires a dedicated actor just for that… And also it requires to recalculate the uggFilter at each changes in the uGrid (unless there is a way to link both with a kind of SetInputConnection but I didn’t find how to do that).
The good news is that it also solve another problem I mentionned here :

Make edges of elements visible when viewed by side Support

Hi all! I have recently noticed that when plate elements are exactly viewed from the side, the elements are no more visible, even if the vtkActor property have EdgeVisibilityOn(). Here is an example of what I say and what I would like to have : [SIDE_EDGE_VTK] I don’t exactly know when the problem appeared but I am sure that it worked in the past. I don’t know if it is a change in a vtk version or maybe an update of my display drivers… So my question is do you know if any parameter can be …